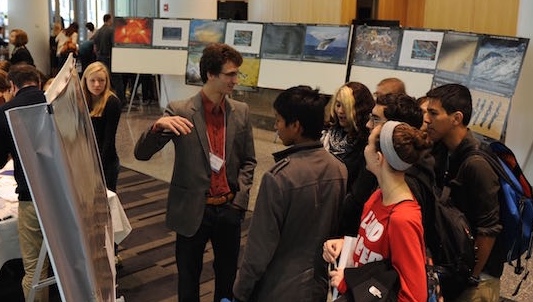 On October 15, 2015, Francois Tissot defended his PhD thesis, carried out in the Origins Lab under Nicolas Dauphas’ supervision and titled, "Geochemistry and Cosmochemistry of Uranium Stable Isotopes”. The core of Francois’ research focused on developing a framework for understanding the variability of the 238U/235U ratio in terrestrial and extra-terrestrial materials. Francois' thesis involved intensive laboratory work, including the development of an unique chromatographic system, for which a patent is currently pending. During his time as a graduate student, he served as a teaching assistant 13 times and was involved in numerous outreach activities. Upon completion of his Ph.D., Francois was offered the prestigious Crosby Postdoctoral Fellowship at MIT, which he started in January 2016.

One of the big successes of Francois' thesis was the discovery of an unprecedentedly large amounts of U-235 in a calcium, aluminum rich inclusion from the Allende Meteorite. This detection provided the first direct evidence for the presence of Curium-247 in the early Solar System, a radioactive isotope which decays quickly to form U-235. This, in combination with evidence concerning other short-lived radionuclides, is consistent with a single environment of r-process nucleosynthesis in stars, which means that many of the heaviest known nuclides could be produced in the same stellar process: a point of strong debate in the last two decades. He published this work in Science Advances in the paper "Origin of uranium isotope variations in early solar nebula condensates," and was awarded the 2015 Nininger Meteorite Award for it. You can read more about the discovery here.