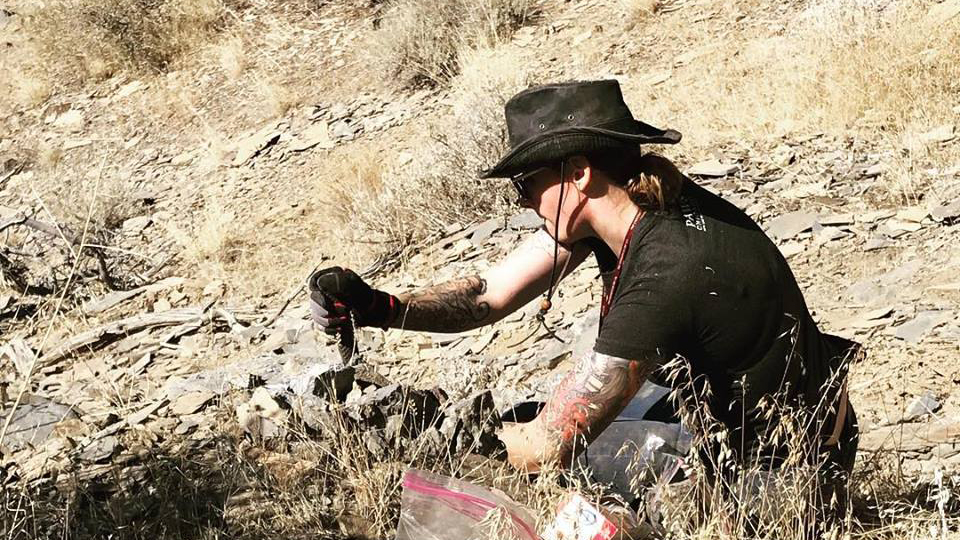 Rhiannon (Rhi) LaVine is a member of the Webster lab whose research interests involve exploring how controls on form at the organism level can potentially influence directions of morphological evolution, particularly during the Cambrian. This period is typically described as showing a “bottom-heavy” pattern of disparity: a rapid burst of morphological diversity followed by a steady decline. One potential driver of this pattern is the idea that increased developmental regulation through time leads to the decreased ability to generate new morphological change or to “experiment” without sacrificing viability. She works on agnostoids, a group of enigmatic blind arthropods that showed up during this time. Her specific interests in these organisms lie in their utility in as an ideal study system to explore how controls on form at the organismal level can potentially influence directions of morphological evolution. She points out that agnostines are notable for being a morphologically-conserved clade: they all sort of look like one another throughout their relatively short history (middle Cambrian to Upper Ordovician). This leads to the prediction that if they're morphologically-conserved, they should exhibit more hardwired constraints on the expression of phenotypic variation.

She is on track to defend her dissertation on December 6th, after which she will begin the next step of her career as a postdoctoral fellow in the IRACDA program at the University of Kansas. She will also continue her work as a part of a team of researchers, led by Dr. Julien Kimmig (research associate at the University of Kansas) and including Dr. L.J. Krumenacker (affiliate faculty at Idaho State University), that is working to uncover and understand the fauna and depositional environment of the Spence Shale of the Langston Formation, a well-known Cambrian Lagerstätte in northeastern Utah and southeastern Idaho that boasts not only exquisitely-preserved soft-bodied fossils, but a unique, abundant, and highly diverse fauna dominated by arthropods. This past summer, they completed a trench of the type locality of the Spence Shale in Idaho and began a thorough taxonomic inventory of the fossil assemblage, which contains several as-of-yet undescribed taxa.