Project Title
How Easy is it to Create a Composite Temperature Record that Shows Global Cooling?
Copy the URL from your study, from the page with the stations selected.
Write your report here.
Criticism of the consensus on climate science takes a number of different approaches. Sceptics variously argue that CO2 doesn't cause warming, or that it does, but that the extra CO2 from human activity doesn't make any difference, or that reducing carbon emissions would be impossible, or futile, or too expensive. More recently, there has been a renewed focus on a different argument - that the globe is not actually warming at all. Much has been made of the temperature record of the last 10 years, of how global warming has "paused" (see for example: Peter Ferrara, Forbes 2012 amongst many others).

This article looks at over three and half thousand temperature records, and attempts to generate a large number of randomly generated "composite" temperature records. Once the composites were created, the number of composites showing cooling was compared to the number showing warming. This was repeated over various time periods. As Ronald Coase said "If you torture the data enough, nature will always confess." I wanted to see how much "torturing" was required to show cooling (or warming).

The method used was fairly simple, I downloaded as many raw annual temperature records as possible, making sure I had a good selection from each latitude bucket. As the browser application would not let me download more than a thousand at a time, I could not download every record. For latitude buckets with more than one thousand records, I took all the records beginning with "A", for other latitude buckets, I was able to click "select all". The total number of records produced was 3641. 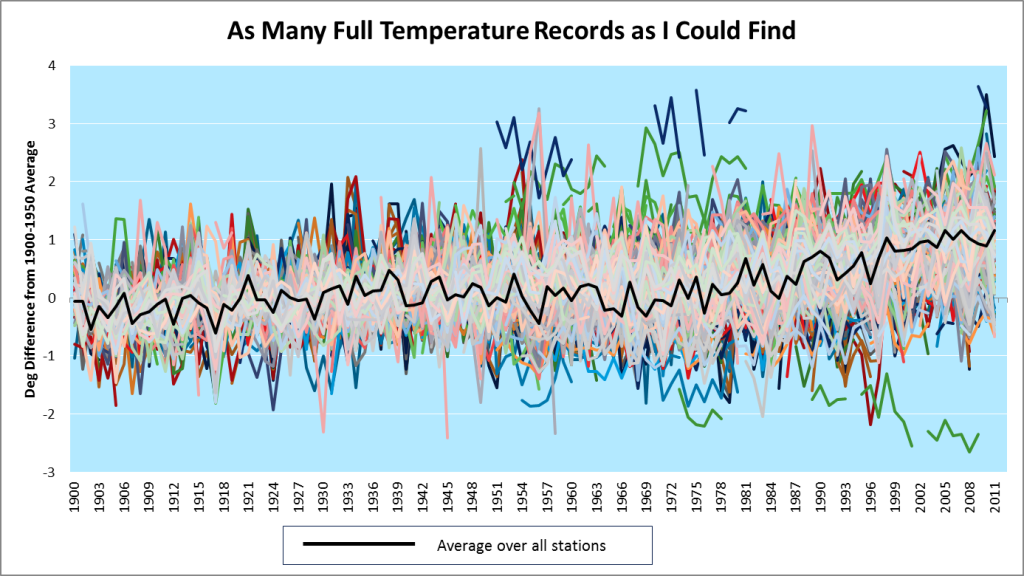 These records were pasted into Microsoft Excel. In order to normalise the records, each record needed some pre-1950 data, so I discarded any records that had less than 5 pre-1950 data points. I also discarded any records that had no data at all in the last 10 years. This left 570 records which were then each normalised. 570 is a comparatively small number, but enough to run the simulation.

I wanted to see how easy it would be to manufacture a composite temperature record showing a cooling trend for different time periods.

For each time horizon, the simulator generated 1000 randomly chosen composite records. The number of records in each composite was random (uniform between 1 and 50), and each record was randomly selected. The composite is the unweighted average of each record (where the record has data). Once the composite was created, a trend was calculated using ordinary least squares regression. The simulator then noted whether the trend was warming or cooling.

The results are summarised in this chart: 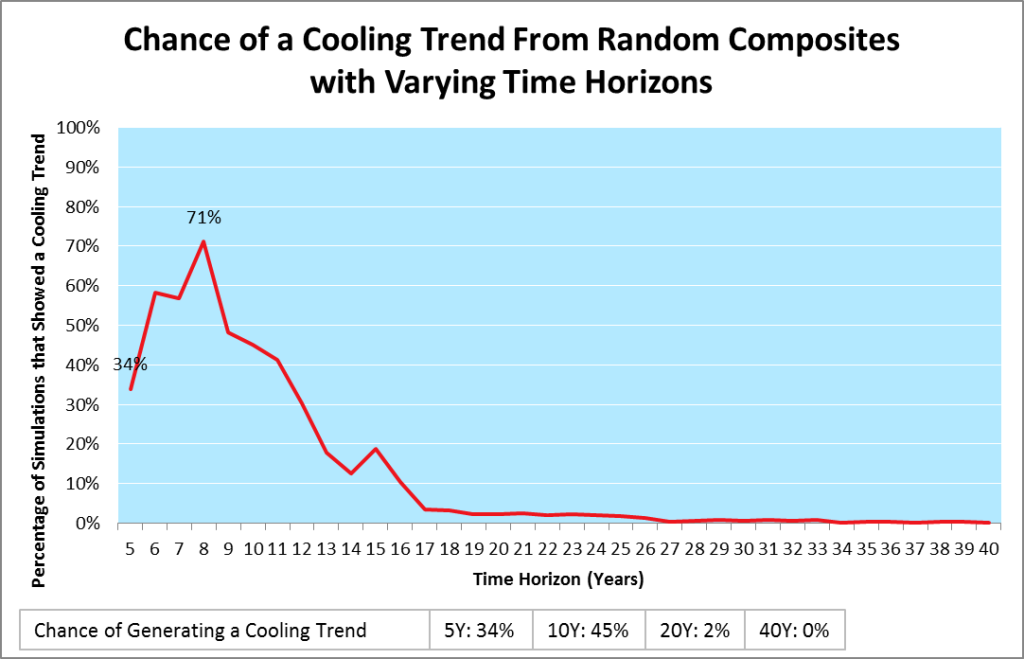 My conclusion is that in general one would have to work fairly hard to generate a cooling trend. If one happened to focus particularly on the period of the last 6, 7 or 8 years, then one can make it easier for oneself, but even then, by cherry-picking the most convenient time period (8 years), there is still a 3 in 10 chance that one will show warming.