Temperature trend in Gulf of Mexico and Caribbean See 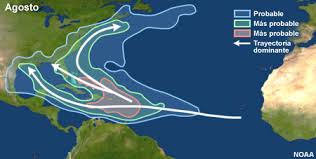 I live in Mexico City and I was born in the state of Veracruz, so I’m interested on what´s going on in the East part of the Country. In general, I want to focus in the zone of hurricanes impact.

Therefore, I took some of the stations around Gulf of Mexico and Mar Caribe (20 stations) to see the temperature behavior, choosing the ones with the longest recording times to decrease uncertainties due to fluctuations. Choosing Global Temperature in Forcings/Records panel, it is shown the plot of Global Temperature vs years, where using annual data one can adjust the best line and find a rise of 0.08 °C per decade. On the other hand, averaging the 20 chosen stations, one obtains a temperature trend of 0.15 °C per decade. Indeed 5 stations show an increase of more than 0.20 °C per decade (Tuxpan: 0.30, Abraham Bay: 0.26, Hato Airport: 0.21, Miami: 0.20, Le Raizet, Gua: 0.20). When I use all the AR5 models to adjust historical data to 2 of the stations with more information, Nassau Airport and Miami, they fail to do it. In average, the AR5 models give a trend of 0.04 °C per decade for each station when the real data are 0.18 and 0.20 °C per decade, respectively. For completeness I compared the historical data scenario for each station choosing the NASA Model (GISS-E2-H) and it did not adjust to the data in any case.

Considering the average in the region, its increase in temperature has been greater than the global temperature increase, so the models are not reliable for future scenarios in this part of the globe. It is likely that in future the increase of temperature will continue to a rate of 0.15°C per decade in average in these stations.

Now, we saw in class that hurricanes behavior is a topic of debate, because although hurricanes strengthen with warmer water (at sea level, of course), the middle troposphere is also increasing its temperature, so it could be that the increase in temperature in both altitudes cancel their effect, because the gradient of temperature would not change so much.

Just for fun and to complete the job, I also saw what happens in the AR5 Climate model Mapper, as we did in some homework of week 7, and around latitude of 20° and longitude of -97° the anomalies (apart of those of surface and atmospheric temperatures, that are considerable) are small, just a little bit more of annual soil moisture and precipitation and a little bit less of cloud fraction.

So, temperature at sea level is increasing, more than what is predicted, it seems that powerful hurricanes are increasing too, but, we do not know exactly what is comming in the future.

Copy the URL from your study, from the page with the stations selected.