Glaciers in the Northern an Southern Hemisphere

This text compares the development of glacier lengths in the northern and southern hemisphere between 1900 and 2002. I does so by taking data of the Climate Time Series Browser of the University of Chicago and exporting it to a spreadsheet for further computations, the length difference data for six glaciers the north and south are normalized and compared to the temperature trends of locations in the respective area. 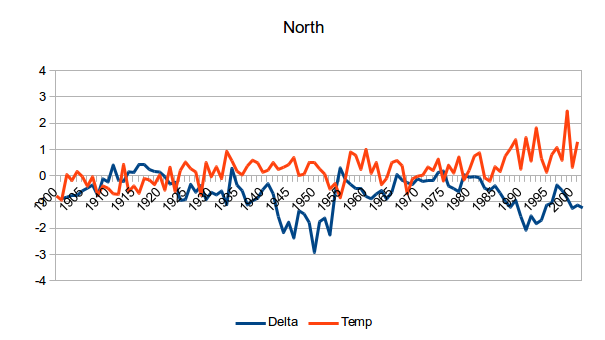 Glacier length and temperature data for the northern hermisphere 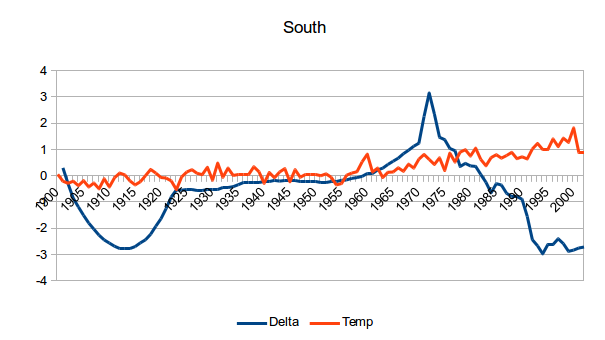 Glacier length and temperature data for the southern hermisphere

As shown in publications (like a study of the University of Berne in 2009), development of glaciers is different in the two hemispheres. Data shows that yearly temperature fluctuation are stronger in the northern hemisphere and also demonstrate an stronger rise there since the 1920s with only a short postwar dip, whereas the south only grew warmer after the 1960s.

The glacier size changes show significant differences for the north and south. While northern glaciers have been shrinking for most of the past century (again with short postwar exceptions), their southern counterparts have shown a rather different behavior: shrinking at the beginning of the 20th century, then staying constant for almost 50 years, growing in the 1970s and then sharply decreasing in size. With most of the southern glaciers being in the Andes - with the Antarctic not having been comparably measured during the full observation period - their climate is strongly influenced by the cold Humboldt current and the “El Niño” phenomenon (increased precipitation and storms on the Pacific coast of the Latin Americas), the latter having been more extreme during the latter decades of the last century.

Especially coastal glaciers (like those in north-western Canada and the US) but also those in the Andes can profit from increased precipitation in winter which counterbalances their losses during the warmer months, which again is influenced by climate changes and the already mentioned “El Niño”.

What is shown by the data of all glaciers is their – partially dramatic – retraction since the 1980s. Whereas some small glaciers have been growing the general trend is a loss of ice during these years, which also show a global warming. With billions of people especially in Asia and South America reliant on the drinking water originating from those glaciers their further shrinkage and already beginning disappearance will influence the future of humankind in the future.

Copy the URL from your study, from the page with the stations selected.
http://climatemodels.uchicago.edu/timeseries/#TjSCebFqpY (temperature data for the souther hemipshere als example)
https://www.dropbox.com/s/shyw3zai424x3h1/TermProjectData.pdf (spreadsheet data for above graphs)