My group uses samples returned to Earth by spacecraft (cometary and interstellar dust; the solar wind) and by nature (meteorites and interplanetary dust particles) to study the earliest history of the solar system as well as the nucleosynthesis of most of the chemical elements in stars. Some twenty-five years ago, a remarkable discovery was made at the University of Chicago: primitive meteorites contain genuine stardust. These tiny (<10 µm in diameter) grains of silicon carbide, graphite and other refractory minerals condensed around dying stars (mostly red giant stars and supernovae), survived potentially destructive processes in the interstellar medium and during solar system formation, and can now be found in meteorites. These grains preserve an isotopic record of the nucleosynthesis in individual stars. We are also interested in chronology and conditions of formation of the first objects to form in our solar system, so-called “CAIs” (Ca-, Al-rich inclusions), 0.001 to 1 cm diameter rocks made of refractory minerals that are found in primitive meteorites. We have recently built a unique new instrument at the University of Chicago, CHILI (CHicago Instrument for Laser Ionization), which will allow isotopic and chemical analysis with much higher sensitivity, lateral resolution, and freedom from isobaric interferences than the previous state-of-the-art. With CHILI, we have begun analyzing stardust and CAIs, and will soon analyze cometary and interstellar dust returned to Earth by the Stardust spacecraft and solar wind sampled by the Genesis spacecraft and returned to Earth by the Genesis spacecraft. We are also interested in broader applications of CHILI in the earth and planetary sciences, where its strengths are in any problem requiring measurement of isotope or element ratios with high sensitivity and fine lateral resolution. A pair of SiC stardust grains from the Murchison meteorite.

CHILI is a resonance ionization mass spectrometer capable of isotopic and chemical analyses of tiny objects with unprecedented sensitivity, lateral resolution, and freedom from isobaric interferences. 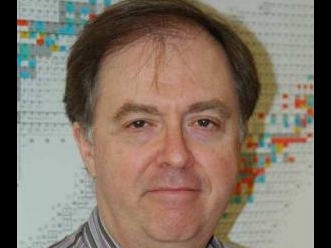