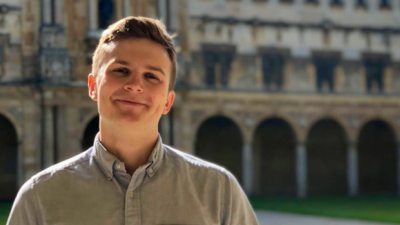 Mark Hammond is a Lindemann Trust Research Fellow who studies the atmospheric circulation of exoplanets, which are planets that orbit stars other than the Sun. Understanding this circulation is important for interpreting observations of these planets, such as their chemical makeup, temperature structure, and wind speeds. It is also vital for understanding their potential habitability. He is particularly interested in tidally locked planets, which always present the same side to their host star. These have a novel atmospheric circulation from their permanent day-side to their permanent night-side.

In a recent paper (https://iopscience.iop.org/article/10.3847/1538-4357/abb08b/meta) he found the mechanism by which the strong atmospheric equatorial jet forms on rocky tidally locked planets, and derived a simple prediction of its speed from the planetary properties. In another recent study (https://arxiv.org/abs/2102.11760), he divided the total circulation of these planets into three physically meaningful parts, and showed how they all contributed differently to the transport of energy. His long-term goal is to produce a predictive theory for the global circulation of these planets -- particularly gaseous tidally locked planets called hot Jupiters -- and test and refine this theory with observations.